Apartments close to the Berlin Museumsinsel: The Ideal Choice For Art Lovers

There is a paradise in Berlin called "Museumsinsel" for those who love art, culture and history. The name means literally "Museum Island", and refers to a central island in the Mitte district of the German capital, where one of the most famous museum areas in the world is located. If you want to get lost in the splendid architectural jewels and heritage conservation corridors, with a unique view of the River Spree, then you cannot miss the Museumsinsel. In the middle of the 19th century, King Friedrich Wilhelm IV of Prussia dedicated this central area of the German city to art and science, although it was once a residential area. Since then, several museums were established in this picturesque area of the city which has impressive buildings. In addition, the Museumsinsel comprises the Lustgarten park and the Berlin Cathedral, and is adjacent to the striking Palace of the Republic. The variety of art works, historical objects, and architectural elements that you can contemplate in this area of the city is inexhaustible; ancient architecture in the Pergamon Museum, archaeological objects in the Neues Museum, Greek and Roman objects in the Altes Museum, paintings up to the 1800s in the Bode Museum and 19th century paintings in the Alte Nationalgalerie. This is why Unesco declared the Museumsinsel complex a World Heritage Site in 1999. 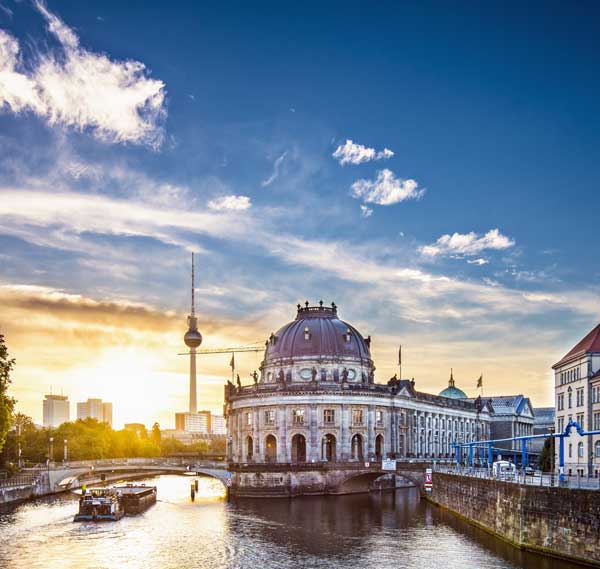 Accommodation near the Berlin Museumsinsel

Berlin is a large, cosmopolitan, active and diverse city. Whether you are a hectic nightlife lover or for those who are passionate about recent history like the Berlin Wall and the Cold War. With nearly three and a half million inhabitants, it is undeniable that Berlin has a life of its own. In addition, thanks to its hectic financial and political life, and its tourist attraction, festivals, historical interest and great cultural offer, millions of tourists visit this city every year. This capital offers all kinds of activities and landscapes. Therefore, you will find a very varied range of accommodation in the city: modern hostels for young people who want to party, classic and luxurious hotels that represent the tradition and history of the city, and cheap family B & Bs. But, undoubtedly, one of the accommodations that have grown the most in recent years and represent the best option for those who prefer a customised trip are our apartments. We have a varied range of apartments equipped with all sizes near the Museumsinsel. Choose the most convenient one for your needs and your budget. You can fully enjoy your visits to the best museums in Germany, as well as having absolute control over your schedules. Enjoy peace and privacy or whatever you are looking for in the German capital.

Museums at the Museumsinsel in Berlin

How to get to the Museumsinsel

The "Island of museums" is located in the centre of Berlin, so it is very easy to reach it. Berlin is a city with very good public transport, with a wide variety of buses, trams, trains and underground lines, in addition to the classic tourist transport. You can get there by public transport from Berlin’s main airports. From Tegel, it will take you about 40 minutes on a bus that leaves every six minutes; your stop is Spandauer Straße / Marienkirche and from there, you should walk about five minutes. From Schönefeld airport you must take a tram (line S9) to Alexanderplatz station and walk 10 minutes. From the central train station, you can take either a bus (line 147), the tram (lines S3, S5, S7 and S9) or the underground (line M5).