Apartments near The Ciutat de les Arts i les Ciències

Valencia is the third most populated city in Spain, and one of the cities with the largest tourist affluence in the country. Located on the banks of the Turia River, Valencia has a very important historical centre, and numerous artistic and scenic spaces.

Among the iconic monuments of this city, such as its cathedral, the famous "Miguelete", and the Lonja de la Seda, and the Museum of Fine Arts, but there is one that stands out: the Ciutat de les Arts i les Ciències

This monumental architectural site, called Ciutat de les Arts i les Ciències in Catalan, was opened two decades ago, in 1998. It is located in the southeast of the city, in the area of the Turia Garden. Today, it is one of the Valencian attractions that draw most tourists, due to its architectural appeal, and the numerous activities that take place in it.

The idea of this conceptual space is to integrate art, technology, science, and nature with activities for all kinds of people of all ages. It has an interactive science museum, exhibition spaces, an art museum, a projection dome, a space for sporting events, and a great botanical walk. 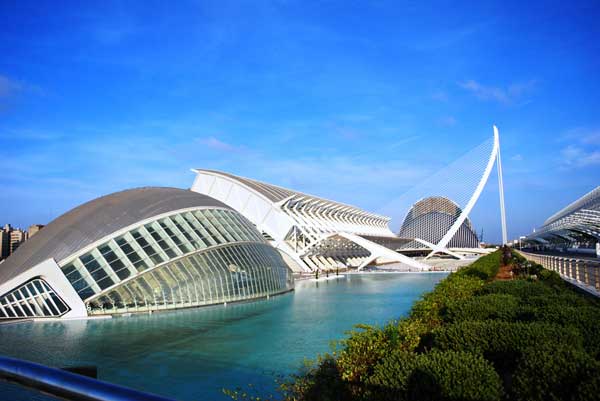 Accommodation near the Ciutat de les Arts i les Ciències

Undoubtedly, due to its enormous offer and size, la Ciutat de les Arts i les Ciències cannot be visited in just one day. Whether you're in town for business or pleasure, you should definitely spend several days touring this impressive building complex. Thus, we recommend you to find an apartment near the City of Arts and Sciences. Since it is a city, and an area with a lot of visitors throughout the year, there is a wide range of hotels of all types, from the simplest to the five-star hotels, as well as other types of accommodation. The best option if you want to have absolute privacy and independence, however, is to rent an apartment in the area of this great event site. We have a wide variety of apartments that will meet your needs. We have studio apartments, and flats with several rooms. If you are travelling with your family, we have the ideal apartment for you. Check out our catalogue!

Places to visit in The City of Arts and Sciences

How to get to The City of Arts and Sciences

La Ciutat de les Arts i les Ciències is located in the historic center of Valencia. You can easily reach it on foot or by bicycle from the center of the city through the gardens of the bed of the Turia River. A large, and green oasis, which is the lung of the city. The bus lines that will take you to the complex are lines 1, 13, 14,15, 19, 35, 95, and 40. The nearest underground station is Alameda, which is reached by lines 3 and 5. If you come by train, from the Cabanyal Station, and the North Station you can get there by public transport. Take the bus line 1 from El Cabanyal Station, and line 35 from Estació del Nord, from where you will have to take the underground at Xàtiva metro station (lines 3 and 5). From the new AVE station you can take the metro, line 5, to the Alameda station (about 15 minutes from the site). From the Valencia airport, it is convenient to take the metro (line 5).