Apartments near the Chain Bridge: your perfect accommodation in Budapest

Your tour of Eastern Europe could never leave aside the capital of Hungary: the mysterious Budapest. With as many attractions and historical points as this city has crossed the Danube, it can be difficult to choose which neighbourhood you want to stay in. We have a recommendation for you! Find an apartment near the unmatched Chain Bridge, the "Széchenyi lánchíd". If there is an architectural element that symbolizes the union between the ancient city of Buda and the ancient city of Pest, that is the point. Of all the bridges that sew the two halves of the city, this is probably the most emblematic. The bridge was designed by an English engineer named William Tierney Clark and built by the Scottish Adam Clark in the United Kingdom and sent to Hungary in parts for final assembly on the Danube. It is very special because it was the first permanent bridge built on this river in the whole country: it dates from 1849. However, the bridge that we see is a reconstruction that was made 100 years after the original, since it was destroyed by the Nazi army during its flight after the Siege of Budapest in the Second World War. On this bridge you can see some of the best views of the city, especially when night falls and the old architectural landmarks of the city, such as Buda Castle, are lit on the backdrop of the Hungarian night. 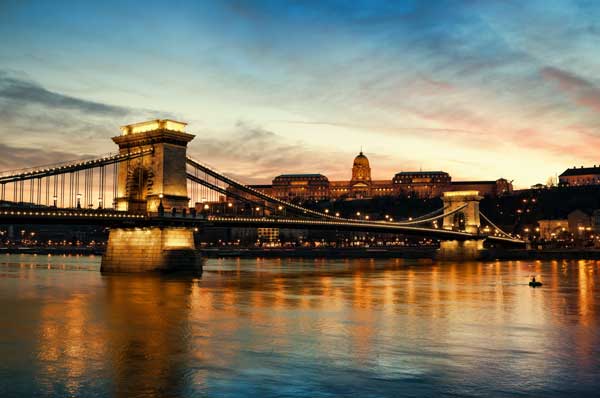 Accommodation near the Chain Bridge

The Chain Bridge is located in a really central point of the Hungarian capital; It is its centre, and its heart. Because of this, around it there is the highest concentration of accommodations in the whole city. In the area of the Chain Bridge you can find luxury hotels, cheap hotels, hostels with shared rooms for young backpackers, boarding houses, and bed & breakfasts. However, if you want to be part of Budapest, and get the most out of your experience in this city, we recommend renting an apartment. We have studios, apartments with fully equipped kitchen, balcony, and much more. In Only-apartments you will find the apartment that best suits your wishes. Fortunately, Budapest is a very economic city and the prices you will see here will be incomparable with other more expensive cities. Take advantage of this, and enjoy a large stay in a furnished and spacious apartment, where you can enjoy the privacy and independence that you will never have in a hotel or hostel. Breakfast at the time you want, avoid having to share common spaces and do not fear for your belongings.

Places to visit near the Chain Bridge

On both sides of the beautiful and historic Chain Bridge you have incredible places to visit. At one end (the side of the old Pest) the bridge leads to Széchenyi Square, where Gresham Palace and the Hungarian Academy of Sciences are also located. On the other side (in the ancient Buda), access to Adam Clark Square, next to Kilometer Zero Stone and the funicular of Castle Hill, leading to Buda Castle.

How to get to the Chain Bridge

The Chain Bridge is in a really central point of the city, so it is very easy to reach from different points and in various means of transport. From the Budapest Ferenc Liszt International Airport, which serves the capital of Hungary, you can get to the Basilica of St. Stephen by taking bus 100E towards Deák Ferenc tér M and get off at the last stop. From there, you should walk about ten minutes, take a taxi or bus 16 to the bridge. The trip by bus takes approximately 45 minutes. From the Budapest-Keleti central train station you can take a taxi that will drop you off at the Chain Bridge in less than ten minutes or take the metro (line M2) towards Déli pályaudvar M and get off at the Deák Ferenc square, from where You can walk ten minutes or take bus 16. The subway ride will take you about fifteen minutes.